The Shin formed in 1998 in Germany, where Zaza Miminoshvili and Zurab Gagnidze have been living since 1994. Mamuka Gaganidze joined the band in 2002. In their native Georgia these musicians are acclaimed among the country’s most elite composers and musicians.

In Georgian, ‘shin’ means coming home. Although each of us has our own home and our own road home, The Shin’s music has the amazing ability to lead everyone ”home,” no matter how far it may be.

Members of The Shin have composed original works for productions at the Tbilisi State Theatre and for film, television and radio programs in their native Georgia and around the world. They have collaborated internationally with artistic greats like Gia Kancheli, Robert Sturua, Jorge Pardo, Giora Feidman, Chaka Khan, Randy Brecker, Okay Temiz, Fuat Saka and many others. The Shin is regularly spotlighted in international festivals and has received significant critical acclaim for its unparalleled originality and magnetic appeal.

During the last few years Zaza Miminoshvili, together with Zurab Gagnidze and Mamuka Gaganidze has launced several outstanding international projects, took part in the festivals in more than 30 countries, won German national World Music Contest 08/09, and always have many exciting and creative ideas for several years ahead.

The Shin’s “instrumental theatre” is the sound of Georgia’s musical encounter with the world. In their music, Georgian-style vocal pyrotechnics, intricate polyphony and instrumental virtuosity meet jazz scat, funk and fusion, flamenco, Ravel and Shakti. How does it sound? Sophisticated, surprising, hip, humorous, and always exhilarating – even at its most sensitive. The Shin’s celebratory musical dialogues know no bounds. 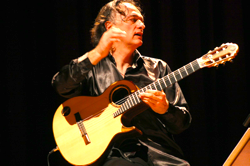 Zaza was born to a family of writers, mathematicians and artists. At a young age he was already spending hours at the neighbor’s piano, absorbed in his own musical tales and directing an invisible orchestra. His formal musical studies began much later, at the age of fourteen, when his mother first took him to guitar lessons. Zaza enrolled as a mechanical engineering student at Tbilisi State University, then as a Ph.D. student, afterwards he received a Humboldt fellowship for post-graduate work in Germany. Nonetheless, all this was secondary to Zaza.

In 1990 Zaza and Zurab founded the group “Adio.” This was the culmination of a long search for a compelling synthesis of traditional Georgian and contemporary music. The band left a landmark on both Western countries by successfully touring Germany in 1993 as well as at home by producing music for the Rustaveli Theater. In 1998 Zurab and Zaza formed the duet “The Shin”; vocalist-percussionist Mamuka Ghaghanidze joined them in 2000. As a member of The Shin, Zaza has taken part in numerous international projects and festivals, led seminars on poly-rhythm, polyphony and improvisation theory, and shared stage bills with greats Jorge Pardo, Randy Brecker, Giora Feidman, Theodosii Spassov and many others. 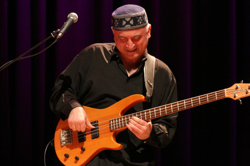 Zurab began singing at the age of three. Actually, he didn’t have much choice since almost everyone in his family sang. When he was ten years old, Zurab began to study voice with one of his grandmothers, a Georgian song enthusiast. In the ninth grade Zurab and his friends signed up for the school’s guitar ensemble, but the ensemble lasted just three months. After that, Zurab spent several months studying with a prominent rock guitarist, then switched to bass.

Zurab enrolled as a student of information technology at Tbilisi’s Polytechnic Institute. The university was rich with musical and artistic life. Here, Zurab has soon become a member of the Institute’s big band. The band received wide acclaim and was invited to perform for television and radio. Zurab was later invited to play bass in the university ensemble “Khomli,” whose repertoire included original compositions based on Georgian traditional music. Zurab graduated from the university with honors and began graduate studies in London. For thirteen years Zurab worked in the department of information technology studies at Tbilisi State University and continued to play music. Then, one fine day, guitarist Zaza Miminoshvili walked into the department and proposed to Zurab that they play together. That moment initiated a long friendship and creative collaboration between these two musicians resulting in such project as Adio and The Shin. 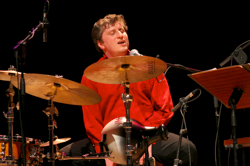 Mamuka’s musical career began at the age of six when he began studying piano and sang the children’s vocal-instrumental ensemble “Nergebi” [The Saplings]. The ensemble toured in Georgia, Russia, throughout Europe, and even in Cuba. In school, he formed an ensemble with his mates. Afterwards Mamuka’s professional search began. At first Mamuka entered the faculty of Oriental Studies at Tbilisi State University.  He wanted to learn more about the cultures of the East, and to travel to Asian countries. He began to study Hebrew, then Arabic.  But after some time he realized that Oriental Studies was not his calling. He transferred to another faculty and began to study cinematography, then later transferred to the faculty of law. Mamuka completed his studies in law but never worked as a lawyer, for he finally understood that his true gifts were as a musician.

In the 1990s Mamuka met up with his friend Zaza Marjanishvili, who was obsessed with jazz and infected Mamuka with the bug. They founded a quartet which quickly found popularity, performed frequently and even recorded for radio and television. Everything went well until 1993, when Zaza emigrated to America and the group fell apart. In Georgia civil war had broken out. Now there was neither room for ideas, nor the opportunity to realize them―the circumstances were grim. But on one otherwise dark, hopeless day, Mamuka received a phone call that would change the course of his life. It was Zaza Miminoshvili, one of the leaders of the ensemble “Adio”. Zaza invited Mamuka to join the ensemble as a vocalist. And so in 1996 Mamuka found himself in Germany, where Adio was based. In 2002 Mamuka was invited to join The Shin, which had been founded by Adio members Zaza Miminoshvili and Zurab Gagnidze. Mamuka contributes to The Shin as a vocalist, percussionist and composer. He has played a vital creative role in all of the ensemble’s projects to date.