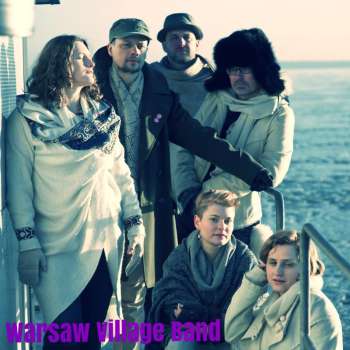 We wish you all a healthy, stress-free 2017, and hope that you’ll stay on with us. As a result of some restructuring here at JARO, there hasn’t been any new releases for quite some time. That’s all about to change! We’re especially delighted about the new, double CD from the Warsaw Village Band – “Sun Celebration” (JARO4335-2). It’s the band’s 7th. release, yet sounds just as fresh as their very first.

‘We have been walking on the musical path for 18 years, and with each journey we notice more and more how strongly people are connected all over the world. “Sun Celebration” is an attempt to tell about the spiritual brotherhood crossing over the religious or ethnic boundaries, which are elevating in these restless times. It is also a story about the two natures of the world, Yin and Yang, male and female elements, day and night, the sun and the moon. Hence, the two CDs and their diversity, the sound experiments of the band and using new instruments, and heterogeneity and charisma of the invited Guests. We are grateful and happy that they have added the splendour to our album, and accepted the invitation and the challenge to face Polish music and that they have given it their talents and hearts.’ – Maciej Szajkowski, musician the founder of WVB, said about the album.
This is so far the biggest production of the Warsaw Village Band. Incredible Guests from various musical worlds include: avangarde singer from Galicia – Mercedes Peón, kemanche genius from Iran – Kayhan Kalhor, sarangi virtuoso from India – Ustad Liaquat Ali Khan, legendary wizard of gramophone – DJ Feel-X, distinguished viola player Michał Zaborski, and others. The new quality of sound production, thanks to Studio AS One. Almost 3 years of intense work, 5 recording sessions in the best Polish studios, 13 pieces, 2 CDs, 1 album. “Sun Celebration” has come!

In 2004 the Warsaw Village Band received the BBC Worldmusic Award. The last CD ‘Nord‘ was winner of the prize of the German Record Critics. The new album “Sun Celebration“ received already the Polish record price “Fredyrik Award”. Their world trance music is in demand all over the world – as  for a dance theater in Montreal, for a trailer of Ophra Winfrey production  in the USA and at  an international festival tour in Australia and New Zealand.

Their “World Trance Music” is currently in top demand worldwide, having been used for a major dance theater production in Montreal, a trailer for Oprah Winfrey in Chicago, as well as in international concert tour planned for Australia and New Zealand this March.

Publication “Lisboa” (Lisbon)
We are proud to announce that the first edition of the Photo + CD book “Lisboa” has completely sold out after just 9 months! From January 17, 2017, the second edition will be hot off the presses, and we strongly recommend it for all those who have ever visited Lisbon, or fallen in love with it. The music of
both the Lisbon band Oquestrada and Fado queen Doña Rosa accompany the sumptuous visual journey. Doña Rosa will herself be swinging through Germany on a 10-concert tour in February, also plugging the book.