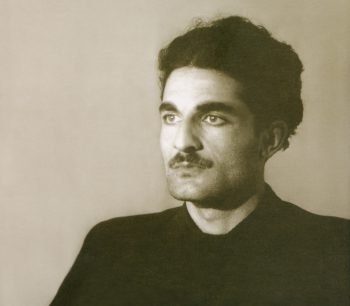 Hamlet Gonashvili was born on the 20th of June, 1928 in a teachers’ family, in the small village of Anaga. In 1947, Hamlet moved to Tbilisi where he studied at Pedagogical Institute. At the same time, he studied at the second music school of Paliashvili on choral conducting faculty. Gonashvili graduated from the music school later in 1974. Till that time he lived in several villages such as: Tskhinvali (1938-1941), back to Anaga (1941-1944), and Saguramo (1944-1947). After graduation from the Pedagogical Institute, he started to work at the Georgian Tourism Bureau  as a lecturer guide (1950-1953). Since 1953, Hamlet worked as a member of the State Ensemble of folk songs and dance. At the same time he studied at Shota Rustaveli Theatre and the Georgian Film State University. From 1970 until the end of his life, Hamlet was a soloist in the “Rustavi” Ensemble.

Hamlet Gonashvili was considered the “voice of Georgia”. He was an outstanding soloist, influential teacher and brilliant performer of traditional Georgian music. Born in the Eastern part of the country, Hamlet was known to be the best interpreter of songs from the regions of Kartli and Kakheti although he did not have any formal music education. He played an important role in the world-famous Rustavi choir, the first choir in Georgia to include into its program songs from all regions of the country. When Sergei Prokofiev heard the songs of the Georgian choir for the first time, he could not believe the fact that this was folk rather than original music work. Hamlet Gonashvili’s huge diapason and impeccable singing ability in combination with his marvelous timbre was usually “leaving the audience hypnotized”. At the height of his creative powers, Hamlet died in a tragic accident in 1985 falling off a tree while picking apples. He had been awarded his country’s most important honors and prizes.

An element of the rich and diverse culture of the Georgian people, the traditional songs of Georgia are a musical chronicle of the country’s history. Despite the numerous incursions of foreign invaders – Arab, Mongolian, Turkish, Persian – Georgia has preserved its language, both oral and written, its architecture, its religion and a large number of unique songs and melodies.

In the course of its historical development, Georgia has come to have many lingual and musical dialects. The song types are named after the different regions and their musical dialects differ considerably from one another in rhythm, intonation, texture and harmony. Fundamentally, Georgian songs consist of three parts, although Gurian and Adzharian work songs sometimes consist of four. A particularly interesting form of Gurian and Adzharian song is the krimanchuli – a type of yodel, a melody of a figural nature. To this day unison singing has survived in Hevsureti, Tusheti and other mountainous areas. Monophonic singing is common in certain types of songs of the West and East of Georgia.

Developed over the centuries, the traditions and styles of performance have been handed down from generation to generation by outstanding singers, many of whom founded their own schools and whose memory lives on in the minds of the Georgian people.

Igor Stravinsky wrote about the Georgian music the following: “Tape-recordings of the georgian people’s polyphonic songs represent important musical impressions. They are recorded in a tradition of active reprodution of georgian folk music, the origin of which begins in ancient times. It is a wonderful discovery and can give us much more than all the modern music can […]“

This Sliding Bar can be switched on or off in theme options, and can take any widget you throw at it or even fill it with your custom HTML Code. Its perfect for grabbing the attention of your viewers. Choose between 1, 2, 3 or 4 columns, set the background color, widget divider color, activate transparency, a top border or fully disable it on desktop and mobile.

This Sliding Bar can be switched on or off in theme options, and can take any widget you throw at it or even fill it with your custom HTML Code. Its perfect for grabbing the attention of your viewers. Choose between 1, 2, 3 or 4 columns, set the background color, widget divider color, activate transparency, a top border or fully disable it on desktop and mobile.
Diese Website benutzt Cookies. Wenn du die Website weiter nutzt, gehen wir von deinem Einverständnis aus.OK