Aquabella is an unique ensemble presenting world music a Capella.  The group has been founded around the curiosity of its members towards Bulgarian women’s choirs, but after a while this changed into  a search for songs and sounds from all over the globe. Ever since, the singers of Aquabella have steadily studied new vocal techniques such as overtone singing or yodeling. The ability to change the quality of their voices and the extraordinary vocal range of each member  makes Aquabella a special ensemble: They sing, play and dance tunes and stories about people who could be living right around the corner as well as at the end of the world.

Aquabella received the 1999 Folkförderpreis (annual German folk music award) and  was nominated twice for the German Schallplattenkritik (2005/2008) with its two concert programs –“Sonho meu”  and “Kykellia”. From September, 2012, Aquabella started working on their new program: “Ayadooeh – Kaleidoskop der Weltmusik”. It will premiere in March, 2013. The program is sung in 18 languages and includes repertoire with songs from Canada, Brazil, Greece and Portugal, with Neapolitan love songs and chants of the Maori from New Zealand, with Bulgarian dance songs, Japanese prayers and Gypsy music.

Aquabella stands for beautiful waters that flow, find its own way, and ripple carefully. Transferring this concept into music, the band is able to keep its listeners under their spell through compositions with many different facets: proud, sensual, elegant and absorbed behavior on the one hand, as well as wild, high spirited on the other. listening to them, one could clearly say:  ”re all at once – river, rain, lake and waterfall!’

During the last years the ensemble from Berlin developed a diverse repertoire of traditional folk music from all over the world in more than 20 languages. They enthused the audience at home and abroad in more than 600 concerts. On their concert tour 2008/2009, Aquabella had over 80 performances in Germany, Austria, Czech Republic, Benelux, Switzerland and Russia. The German Magazine– Zeitung referred to the band’s performance as:  “They are so perfect, you can hardly believe that it’s all really live. No wonder the public got one attack of goose bumps after another.” 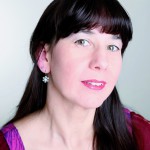 Claudia is a singer and arranger. Her former music education includes vocal Pop- and Jazz training in Berlin with Juliane Gabriel and MFA Kera. Additionally, Claudia is proficient  in the Bulgarian singing technique. She gained experiences on stage as a soloist as well as a background singer for many shows with diverse bands.  Her former ensembles and bands include: “Klangkartell” (Pop, Swing, Jazz), “Sham Rock” (Irish Folk ), Ensemble Tschubritza (East European Folklore), Fôô Fannick (African Reggae, Funk) and „Mothers Pride“ (Ska). In the Aquabella, she plays different drums like Udu or Cajon. 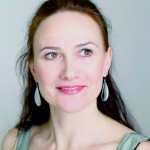 The Dutch born actress and singer has completed her  formal vocal and acting training in Berlin. With her unparalleled convertible voice, Heleen became successful in almost all genres of spoken and musical theater. As a singer she has performed at the Flensburg Opera, toured with Konstantin Wecker and the Munich Symphonic Orchestra, and makes periodic solo performances accompanied by  Nuremberg Accordion Orchestra. Heleen also works for the Theater Atze Berlin.

Receiving her formal training in acting and singing, Bettina is now working as a vocal coach and studio singer in Berlin. In addition, she offers workshops in singing and performing for choirs and soloists. In the Aquabella ensemble she plays different drums, the hand drums, Udu and Pandeiro. 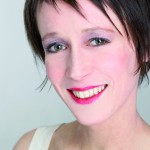 Bérangère is a French singer from Ardèche. She has graduated in German Studies in Grenoble while making a theatrical training at the “Conservatoire National de Région”. Since 1997 she lives and works in Berlin. Here, Bérangère has organized her own chanson programs. As a testimony to that come two solo albums: “Libellule” (2005) and “Le Bleu de Berlin” (2011).

This Sliding Bar can be switched on or off in theme options, and can take any widget you throw at it or even fill it with your custom HTML Code. Its perfect for grabbing the attention of your viewers. Choose between 1, 2, 3 or 4 columns, set the background color, widget divider color, activate transparency, a top border or fully disable it on desktop and mobile.

This Sliding Bar can be switched on or off in theme options, and can take any widget you throw at it or even fill it with your custom HTML Code. Its perfect for grabbing the attention of your viewers. Choose between 1, 2, 3 or 4 columns, set the background color, widget divider color, activate transparency, a top border or fully disable it on desktop and mobile.
Diese Website benutzt Cookies. Wenn du die Website weiter nutzt, gehen wir von deinem Einverständnis aus.OK